The Burton Overy Women's Institute meets on the second Tuesday of the month. Locations of the meetings vary.

Everyone was saddened to hear of Alan Chandler's passing in June, such a lovely man and greatly missed.

At the November AGM, Alison Tasker was welcomed back on to committee. All other officers agreed to serve for another year. Due to the Village Hall being refurbished, this meeting took place at Margaret Pollard's home. In December our Christmas party was held at Alison's home. Alison provided the main course and members brought puddings. (Delicious!) Our Christmas charity collection raised £22.50 which was given to the Lifeboats Institution.

The January meeting was the first of three to be held in the afternoon. This was preceded by a New Year lunch. Excellent food was provided by Jane Chandler who with assistance from husband Al also decorated the Brian Pollard room for the occasion. After lunch Peter Motley from VASL showed a video and talked about the work done by this voluntary organisation.

In February Alison showed slides of Cambodia which she and her husband had visited. She gave a very interesting and informative talk about the country and people. Money raised from Pennies for Friendship was sent to the Associated Countrywomen of the World.

At the March meeting, the speaker was John Martin, his subject, Agatha Christie. Another good speaker. Also in March, four members attended the Annual Council Meeting of the Leicestershire and Rutland Federation of WIs at the grammar school in Great Glen. The speakers were Michael Vlasco who gave us the history of Trinity House, from its beginnings in the 16th century right up to the present time. Laura Bingham told us of her life as an explorer, and Hazel Coalville, Anna Welch and Anne Miller McCaffrey represented the armed forces, eloquently describing the opportunities available to women in the modern Army, Navy and Air Force. The final speaker was Gyles Brandreth, who kept us laughing all the way through his talk which was about the importance of language and communication. In March too, four members attended a High Leicestershire group meeting at Thurnby. The evening started with supper - kebabs, followed by clementines, dates and Turkish Delight, and finished with a display of belly dancing given by Roxanne and her assistant Rose. A very lighthearted evening.

The speaker in April was from the Air Ambulance service, with particular mention of the Children's Air Ambulance, an interesting and thought provoking talk

In May there was a discussion and vote on the resolutions being taken to the National AGM in June.

The speaker at our June meeting was Lizzie Hornsby, her talk was called King Richard III, the man behind the myths. Lizzie is an excellent speaker who gave a real insight into the known facts about the king.

In July there was an outing to Foxton Locks where members enjoyed lunch overlooking the water.

Margaret Pollard hosted a Bring and Share supper at her home in August.

In September Jane Chandler and Beryl Connolly organised a craft evening where a start was made on making the decorations for the WI Christmas tree to be entered in the village Christmas Tree festival. 16

In October Ruth Austin came from Hydes Herbal Clinic to tell us about her work there. She willingly answered our many questions.

November is the AGM, not a long procedure!

In December there will be a Christmas party held at the home of Alison Tasker. This is always a happy and festive occasion

We were saddened to lose our oldest member Jean Brown in January, she had been ill for some time. Always a keen member of the Institute, Jean was involved in every aspect of WI life, never missing a meeting until her last illness, and always ready to volunteer her help. She is greatly missed.

The January meeting was preceded by lunch. This was intended to be in December but bad weather forced us to postpone the meal. Jane Chandler did us proud with a splendid late Christmas lunch, complete with candles and crackers, thank you Jane. Lunch was followed by a talk from Duncan Sims entitled "Most people have got the wrong kind of Will - don't let it be you" a very informative and amusing speech.

The February meeting, also in the afternoon, was on the 13th. Members spent an enjoyable time decorating cupcakes for Valentines Day. This was also arranged by Jane.

In March we reverted to evening meetings. Several members brought along an item which was special to them and told us why they loved it.

The April meeting will be on the 24th, not our usual date but as Burton Overy WI was formed 100 years ago on the 25th April 1918, we chose the nearest Tuesday. Members were presented with a framed group photograph taken by Graham Thompson. Richard Adams brought slides set to music, his theme was "Memories are made of this." it was a delightfully nostalgic presentation. The evening ended with champagne and a beautiful birthday cake made by Jane Chandler.

At our May meeting, after discussion we will vote on the resolution Mental Health Matters. Our decision will go to the National Annual Meeting in Cardiff held in June. After the vote Ian Milne will give a talk on Kenya.

In June Jackie Palmer gave a flower arranging demonstration and everyone was helped to make their own floral buttonhole.

Our outing in July was to Barnsdale Gardens followed by afternoon tea at Barnsdale Lodge. It was a very pleasant afternoon.

Margaret Pollard hosted the August meeting at her home, where members brought food for a Bring and Share supper.

In September our speaker was Anne Bloor who told us about receiving Maundy Money from the Queen. It was a very interesting talk, and Anne looked very elegant, wearing the outfit she had worn on the day.

Our October meeting was spent making decorations for the Christmas tree we intend entering in the Festival in December. There was a lot of laughter and chatter!

November will be the AGM followed by a quiz.

In December our Christmas meeting will be at the home of Alison Tasker. 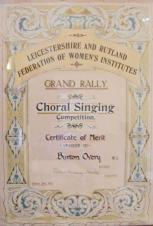